Showing posts from May, 2016
Show all

Sports Day at Rosslyn Academy. In some ways I dread the day, sitting out on the field in the blistering sun for 6 hours to cheer on a 2 minute race for each kid. It rubs my to-do list the wrong way. But I remembered the last field day, and how inspired it made me. So off I went, with my water bottle, sunscreen, and packed lunch.
Isaac had been practicing for 2 weeks--by running up and down the hall in our small house over and over again until sweat beaded on his lip and my sanity lost its grip. Thankfully, his race was first. 200m down the track against the other 1st grade boys.


Off he flew, quickly establishing a lead. I know our kids are small, but man--they're FAST!

And then...he ran right out of his shoe. Literally. Left it all on the track. And what is a boy to do when his shoe comes off in the middle of a race???

Mom's always said to NEVER play outside in your socks, so you turn around.


But then you realize that all the others have kept running, and you've been l…
1 comment
Read more
More posts

Popular posts from this blog

Grass is grass, no matter what side of the fence it's on

August 15, 2017
So I discovered I still had some lurking 'premeditated resentments,' and I didn't even realize it until it was too late!

Instead, we discovered the sellers had just cut the hoses close to the tap when they couldn't get the old washing machine tubes off. At midnight, after a week of VBS, Chad said, "Let me hook the washer up real quick for you." We all know those are famous last words! The twist of a wrench, the snap of metal, the spray of hot water, and Chad's calm voice calling out,

And the saddest part was, I knew exactly what he meant. I gathered up the same towels, which I had washed and fol…
Read more

June 19, 2017
I read another great quote this morning, this one from Martin Luther King Jr. "We must accept finite disappointment, but never lose infinite hope."

I don't even know how to characterize this past week. Some new friends invited us to go with them to their beach house for a few days. We had just been praying we'd get a chance to take the kids to the ocean once more, but it didn't look like it was going to happen. Then God blessed us through His people. We were so excited!

Then we got a call from Omara's doctor. She'd been complaining of abdominal pain over the past year but lately it had been increasing. I took her in to see a doctor, expecting a minor intestinal issue thanks to Africa, but quickly discovered she had only gained 1 pound in the past year. At 6 1/2 years old, 35 lbs is a bit...little bitty. So we drew some labs (at my insistence...but who is keeping track!). Those labs came back positive for Celiac Disease, an autoimmune disease that leads t…
Read more

Water falls on the just and the unjust... 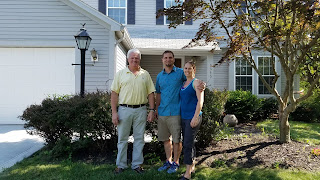 Just as I said last week, Tuesday turned into Wednesday. I LOVE it when things are predictable!

At 10am, most wonderful friends showed up at the church, and we drove up with a 17-ft Uhaul. By 11:30 we were all loaded up with no place to go. Closing wasn't until 2pm. But God.
God is an expert at blessing with most unexpected blessings, and the old owner of the new house texted our agent and said, 'go ahead and move in whenever you want, as long as you're sure you're actually buying the house at 2pm.' As long as I'm sure????? Wild horses from the hills of Yakima couldn't keep me from signing those papers at 2:00!!!!! Pshaw!!!
So we drove over to the house, and everything we owned (minus a few boxes at our friends' where we had been living) was unloaded and put in the right rooms by 1:30pm! God knew my heart's desire was to sleep there that night, and He made it possible.
We went to our signing all sweaty and nasty--figured they wanted our money, not…
Read more

The Pumpellys
United States
Chad has three passions: Biblical discipleship, The Ohio State Buckeyes, and being outdoors (especially viewing game, both winged and otherwise). Miriam is a Family Nurse Practitioner who loves to read and scrapbook, neither of which she has enough time to do. Our 4 kids bring us joy and pain, inspire us, challenge us, and humble us in ways we never could have imagined. We are an imperfect family, doing our best to celebrate victories and learn from mistakes as we navigate real life. We have been part of several awesome "clubs". Clubs for Third-Culture-Kids, Overseas-Workers, and Ministry-as-Life. And we're members of other clubs we never signed up for: The Autism club, The Children-with-Mental-Health-Issues club, The Celiac-Disease club. The following blog reflects our joys and struggles with our club memberships, and yet our desire to accept what is and to grow into what can be through the surpassing great love of God.